Our last night’s unfulfilled task makes us rush towards Acropolis. Smooth paths, a crowd of all nations and languages flows through the profitable filter of the cash desk and ascends through the ancient theatre entrance. The way to the Light of Wisdom is open, the secred, well hidden here, on the Athenian peak at the and of the road used of so many millenia by the sacred processions. Although the carved friezes  still lay, stolen, in other European museums, nothing can steal the serenity and unseen force of this place. The power statement made by the great temple, and then the secret center that radiates energy and knowledge. 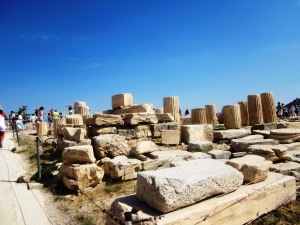 Erechteion, the Cinderella of the place, with its hidden beauty, and the six, six, six statues.  Three and three. Trinity in its feminine aspect, trinity in its masculine aspect. Complete fusion of polarity, with all its sides: potential, creation, destruction. There is so much knowledge, so much wisdom and so much Light stored here, in the old stones that sing for the ones who have ears to listen….

Beyond obvious elements and the explanations pronounced by the guides, in all languages of the Earth, abounding in facts and figures with no final sense lies the Light. In the Upper City, the chose ones get to reach it, and the merit is higher if they know how to absorb what is happening and what is conveyed here.

We descend through the back, after circling all great buildings and fueled ourselves with the power cocktail they administrate. People flocking here in the thousands daily must be sensing something. There is something drawing you, from thousands of miles away, like a compulsory  point of passing in one’s path through Life. Seeking the sacred road,  the one I remember from another time, when there was no pollution and no noise, and I recall it going up, nopt down, we get to the sign of wise old lions, heritage from our stellar dowry, on a path where we only meet gardeners and archaeologists.

Behind it, under the great supporting rock of Erechteion, there are three, again three caves. We are three. After repeatedly getting the message about four, here we are, three, a family over lives, researching and searching whatever is hidden here, under the successive layers of civilization . marked with modest signs, the caves show signs of early buildings – the poles had support sockets in the rock, and one can imagine the inner spaces, from another age, but belonging to the same profound luminous energy that makes the contour of the stone shiver and buzz in the bright morning sun. 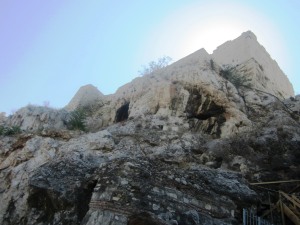 No doubt, this is a place worth sitting and meditating. The entire endeavor finds a meaning, the dots connect and become a very clear drawing, starting from I.’s diffuse intuition on Apollo’s portals. Athena was his ally. His sister and ally. IN brotherhoods described in a mundane way by the chronicles carved in stone, but well kept behind the stories lies the mystery of the high energy, layered successively down to the insectarium of the physical dimension. These energies let Creators mold the flesh matrix, conteiner of the Spirit. 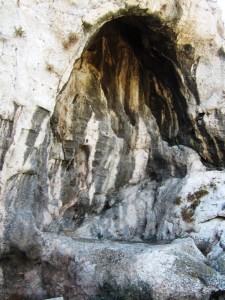 A steep descent brings us back, to the sacred road. Lots of new fences appeared since my last visit here and it is much harder to keep with the route of the old processions, but the tickets we bought up on the hill allow us to get down, to the temple of Hephaistos – why him? – and to new memories that have no other connection into now than our continuity of consciousness. Kings of the place, agora, life then, and the fields radiating from the supple buildings, sitting on columns. The road takes us back,  to the street that leads to the hotel, in front of  Moma: this is an offer that we absolutely cannot decline… so we sit again for a salad re-make, this time crowned with a typical orange cake, sending us to Heaven on a slope of vanilla ice cream. Real vanilla. No artificial coloring, the tiny black aromatic seeds visible in the milky dream. This place is a blessing. And, thus slowly landing into the world, we decide to grab our gear and go to Delphi. 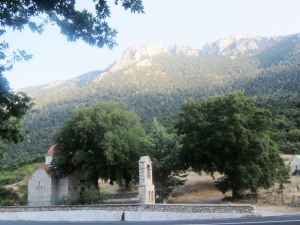 Starting is a nightmare, both the real and digital guys in the car have a controversy and meanwhile we are looking for a place to repair the air conditioning. It is Friday… The Greeks do not work. Well. As we are heading to the mountains, it should be cooler there. After not listening to Gitsa and instead of heading West we went North, entering the highway, arguing about the optimum route, we need to stop for a coffee to ease the tension before driving the driver nuts.

It does sound odd, but although in a honey-like mood, it does not mean we cannot have different opinions, and the energy is high, influent, impacting. So I start working on it a little bit, with focus on containment, so that we would not trouble our driver again. We take a left and enter a fairy tale road, among hills that seem to grow bigger and bigger, until the road becomes really curvy. A., apparently obsessed with caves in this trip, finds a ruined tower, guarding a cave with a crumbled roof. The sensation of heavy, stagnant energy, specific to cursed places, is amplified by the black traces, tar-like, as if the fires of Hell had burned here. A blessing, a candle, then we go. Gitsa and the map provide identical opinions this time, and we float up the winding road, to a magic place. 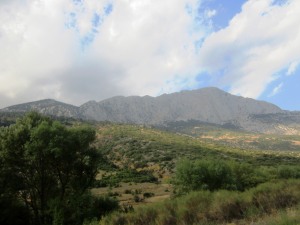 A small terrace, nested in a curve, by the road, with old trees, fountain and wasp traps made of punched soda bottles, waits, anesthetized, for travellers to stop for a juice, a coffee… anything. We find there an old lady – probably operating the kitchen – and a waiter-receptionists-good-for-all young guy who looks like a monk in civil disguise. The beard, the pigtail, the sensation of balance and peace. Definitely a monk, maybe not in this life.  We are resting around a soda, called lemonade, looking like Kinley and tasting like Sprite, containing a ton of sugar, a beer, a tea, and stories. Up there is a road going to the ski slopes, but the cable car does not work. An option for tasting the energy of Parnassus.

The mountain vibrates ample, profound, overwhelming. We jump into the car, we are speding the night in Delphi, and need to find the hotel I reserved via Trip Advisor.  Brilliant. Called Fedriades, the manager worked in Ramada and one can notice the large hotel chain type of training. The rooms see to the Gulf of Corinth, a distant promise of a captive sea, and as the night falls, you can feel more and more the magic of the place.  Delphi infiltrates into the mind, gets into the body, like a magic potion, working in stages. We are all high in a way beyond description, walking on the narrow streets. My eyes are instantly caught by a medalion with a strange symbol, one that I seem to have known forever. A kind of a cross and a slightly curved shape of an eight- pointed star. Two Epsilon letters, back to back. And when I ask for it, the eyes of the shop owner grow bigger: how do you know about the Epsilon?

It looks like we have just bumped into one of the Ancient Mysteries.

The Syrius connection.  I.’s theory about the portal we came through starts getting some substance. The symbol, they say, was carved above the sacred rock of Pythia. Old knowledge flows. I  recognize and chood sthe symbol from the whole bunch of silver pendants in the window. The lady asks why have I chosen it. I am on  the auto pilot anyway, floating in the thick, liquid energy, that I know it and came for it. The store pulls the blinds down after I make the purchase and I feel like I am in a space/time fault, like a galactic gas station where we came to fill our tanks. Then we find another store, another pendant… and yet another one… and the necklaces we needed to wear the symbol of our imminent meeting with what called us here in the first place. 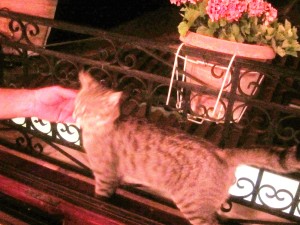 Still groggy, we stop at one of the too large, too empty restaurants, reflecting the size of tourist hords in the high season. A cat shows up from nowhere, going straight to our Tiger. A batch of tenderness beyond compare and a treat with the only thing she would eat from our vegetarian meal: butter. Then the cat is swallowed by the very night she emerged from, and the darkness weaves magic around us, dense and almost material, so we head back, to the hotel rooms, to prepare something special.

Although used to go to sleep late, tell stories, cuddle in bed, wrapped in teh wings of Night before starting our astral journeys, this time something very strange happens. After opening the space, we are suddenly sucked into the craziest dream parade, mixed with teachings and mysteries that we have ever experienced up to now. A journey beyond compare, in which I feel the fusion of polarity, understanding why the two welded Epsilon and I feel A. in the next room living her own encounter with The Fourth.
The fourth in this expedition. There is four of us in the Light. The altar and portal stay open for us, at least until tomorrow.  The pendands vibrate around our necks, picking all useless things from the bodies, getting us rid of old signatures, reprogramming, harmonizing, realigning. The alchemy has started, and we threw ourselves into its magic core, serene, not knowing what will be, but understanding that the only way is ahead.