There are several possibilities to reach the top. Most of the information show two – we chose the one recommended by the hotel manager in Delphi. But, as we were about to see, all these paths are made of obstacles, like in fairy tales. We would find out much later that there are four roads to thte top. All, extremely treacherous and difficult. Especially in the final part. On the road atlas in A.’s car, the road seems straight…. because everything is so small on that map. In fact, it is a stubborn winding climb. We go through Kira and we want to descend on the other side, through   Agios Dimitrios. It’s just that the plan made home does not ever fit with the one in the field. 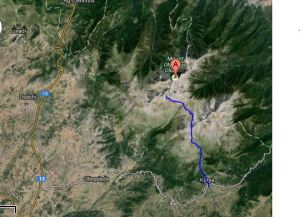 IN  Kira we are being mislead by the vegetable merchant, roaming the village with his truck full of goodies and a huge ancient scale… then, a Greek woman, just emerged from the Sunday church service, indicates in French where to meet the tarmac road. We wind up, up, on the massive rock. A crossroad with no sign, next to a tiny church: Saint Nektarios again. The door is open, candles at hand, everything prepared, but apparently no none there. We go around, light our candles, and proceed as we thing it would be ok, but, with all crossroads, the direction seems wrong compared with the one we knew we needed. So we turn through the forest :D. The Opel literally goes up a path until we meet another road that goes up, up, up. It is the good one, just that we should have had a real 4 x 4, not a SUV. The car should be tall, with big wheels, able to climb the rocky road.

We need to leave the car, nicely parked next to the road portion that became an issue. STarting on foot, now I know there were about another  12 -15 km to go

The energy of the place is huge. I realize each of us, not only I., has their owhn quest to perform here. And there is goes. Fitness, choice of path and the terrain itself separate us and each of us goes on a personal discovery way. Mine, beyond meeting the limit of lack of exercise and overcoming the crushed knee, which is the most strained during the climb, a spiral going up to the right side of the mountain, gets me to a level where I have to get over the pain and exhaustion of the three hours of continuous, gruesome climb on constant rocky- gravel ground that does not allow for sizing your step properly, but continuously oscillate depending on the height of the next rock to step on.

The Top is not visible, it remains shrouded in mist, as the physical level is left behind because of all the effort, and I enter a totally different layer of consciousness, where the body mechanically works, but all energy forms and shapes around become visible, totem animals start showing,  the stones shift their shapes and whisper. above all, the presence of the Mountain, giant, overwhelming shape of solid energy, the presence of Creators of Form – the Elohim Gods –  and the revelation of the personal leap get a much higher importance than anything else. I am climbing a mountain that leads to the M shape peak of Olympus, knowing we are a kind of strange catalyst for a circular wave that is opening here and now. My mission is different from I.’s. He is completely infused with the physical, intense need to reach the top. ,As usual, a step behind, I open and close spaces, activate the grid, I would like to stop and meditate… at a certain point, I realize the difference between our tasks and I decide to sit. I am completely overwhelmed by the power of this place.

Everything seems to loose its relevance, facing the huge fields watching us like silent giants, with arms crossed. Beyond the top of this mountain, the real climb starts. I. knows, it is late, almost 4.30. We will not get to go up today. So he makes the decision and here we go, floating down, on a different road than the one we climbed. The descent is like a dream, in spite of the continuous pressure on hips and the knee. Among junipers bushes, back, to the car that gently waits, in a place worth an Opel commercial,  so that we can go back to a beach, at a decent hour. Or not :D.

We drive down the tarmac road, until we see another little church. Everything is closed, nothing locked. We light candles. I. Starts the bell. I hope the village does not come for service

The road that heads down to the village is closed, but the Gate Opener makes way for us to descend. And we go down. and down. Olympus is almost 3,000 meters tall, so the way down seems endless.

There is gas for another 60 km, we are on our way to Agios Dimitrios, to return to Katerini. A road sign says Ski slope, Olympus.  I. goes ballistic, he is like a kid in front of the candy store window. So here we are, up again, towards Olympus, on the other side. The Northern one. The beautiful asphalt road ends right in front of a military unit. When we were about to turn back, I. jumps out of the moving car cand tells us to wait a bit. Returning, in triumph, he explains the terms: we only need the passport and a phone number, provided we return before it gets darak and take no photos of military items.

Just a turn around this curve, he says. Then there is another turn. And another one. I understand his quest, it is his path not mine and the attempt to fool me like I was a little kid does not fit my appreciation standards. Turning back, I head straight to the laptop, there is  something urgent I need to finish for business. Music on, mind in the marketing plans and budget Excel sheets, the frustration vanishes like dew in the sunshine and I am back to my butterfly serenity when they return. A. is dead tired, she gave up as well at a certain moment. It is not the time yet.

Well. This one, checked as well, although incomplete: time to go to  Katerini. We skipped meals, it is time for a dinner, at least… and that is what we are doing. After unnecessary turns, due to successive conflicts between I. and Gitsa, us girls decide to follow the Olympic Beach signs, which is exactly what we do, and we end up in a super conglomerate of hotels, where we get a six bed apartment for the enormous price of 35 euro

. The we descend into a restaurant. I. does not like our sharing style, he orders something thinking it would be chicken and ends up with a salty pork gyros, exchange through the kindness of the owner. The chicken is salty, too. By contrast, our eggplants, zucchini and  tzatziki, accompanied by other vegetarian mini dishes,  looks much more enticing. The impossible food is packed so we do not hurt the owners’ feelings and we compensate with quite a bit of ouzo, naturally leading to the final brandy. We finished the Metaxa bottle, it was time, tomorrow we will be leaving. And the words float further, into the night, between the scent of the nearby sea and the holy rocks that we came from.